Posted on January 15, 2009 at 4:41 pm by biracer
Hulk Hogan you have to love him. It does not matter if he is putting the hurt on some chump, or talking about karma crippling a kid in a car accident. Yet what I really love about the Hulkster is his acting skills. This is where the true Hulk shines through, and I am not talking about his reality show “Hogan knows best.” I am of course referring to his MOVIES! 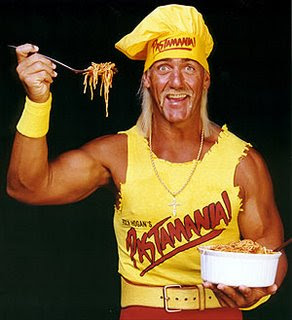 The man has some serious acting skills. They are KaraZy! Films that he has been in are as follows. I may have fogged on one or two. It was a long weekend, and by hour 3 of movie viewing I was all hulked out. I seriously was looking forward to the old coming attraction trailers than the movies.
3 Ninjas: High Noon At Mega Mountain (1998)I saw this several years ago, and I think he was the main bad guy…or something. All I really remember is that it was in an amusement park. Thats really about it. The first 3 Ninjas was the best, because “Rocky loves Emily.”
Assault on Devil’s Island (1997) Have not seen it. Was a Made For T.V movie, their are two in the series, and that series is Shadow Warriors
Santa with Muscles (1996) Hulkster gets a bad case of the amnesia, and thinks he is Santa Claus. How exciting, and since he is Santa he has to beat the crap out of filler villians to save an orphanage. The hulk really knew how to connect to the everyman, The blue collared Joe 6 pack who gets amnesia, and suddenly finds the urge to commit random acts of violence for the pleasure of children.
Mr. Nanny (1993) Once more Hulk is a good guy. My main beef with this is the cheesy last name of the villian, Thanatos. How clever too name someone who wants destruction ,and death after a God of death. Even better is when he doesnt even attain a moderate level of satisfying destruction. Its like a lap dance where the stripper doesnt cry at the end.
Suburban Commando (1991) I wish a justice loving intergalactic commando would crash land on Earth, and through our series of misadventures we would  gain valuable skills from each other.
Skills like awesome fight moves, one line confidence boosters, growing moustaches, and how to be a man. He will leave for a quieter family life, and I will have the confidence that comes from growing older, and wiser with the stern guidance of an Intergalactic muscle man.
Gremlins 2: The New Batch (1990) Cameo nothing majour
No Holds Barred (1989) The film that Launched Hogans career. Rip was his name, and moralistic Wrasslin’ was his game. Until a rival channel wants him. They send the GOONS! Then they  start an evil wrestling crew. I lost interest before the credits rolled. I know I should have watched the rest. I really meant to, but  then I found out Hustler released a porn about Sarah Palin. God Bless America!
Rocky III (1982) THUNDERLIPS!!!!!!!
Muppets From Space (1999) Another Cameo.
Spy Hard (1996) Hey look a cameo!
So if these films do not make you love Hogan, WELL BROTHER-MAN YOUR BEYOND SAVING!

One Response to Hulkamania Brother

Bad Behavior has blocked 1215 access attempts in the last 7 days.