Snuff – A Documentary About Killing On Camera 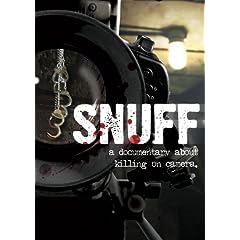 Snuff : A Documentary About Killing On Camera

Ah the age old question: snuff, is it real?

This documentary starts off by giving a clear definition on Snuff, it’s a movie of an actual murder which is made solely for the purpose of selling and making money. Several movie directors and producers give their thoughts on the subject throughout the documentary, one FBI agent and one police woman give their thoughts an prior experiences.

Next, it moves on to American movies and snuff which tells the story of the movie called Snuff which supposedly started this whole actual-murder-on-tape mess and, of course, mentions Faces of Death and such like, but they also don’t meet the criteria for being true snuff.

Part four discusses serial killers. The fact that some record their murders is discussed too, but again, this doesn’t qualify as snuff, they didn’t record it for profit. They discuss Charles Ing and Henry Lee Lucas (and, briefly, the movie Henry: Portrait of a Serial Killer). So again, we need to look elsewhere for snuff, where now?

War. It show’s death and people being murdered, but again, it’s not for profit. And this one section is where I think the documentary got too political by quickly mentioning Vietnam then dwelling on various Iraq video tapes (the killing of civilians and torture of prisoners, ironically not mentioning the hanging of Saddam, maybe that happened after the documentary was made) then bringing on some anti-war guy who contributed nothing to the discussion, other than big numbers.

Finally we get to hear the never before recorded story from Producer, Mark L Rosen. He claims that he was approached by a man who wanted him, and his associates, to look at a film with the possibility of distributing it. Mark claims that the movie started off as a kinky bondage affair which then showed the man suffocating the woman with a plastic bag over head and slitting her throat. ‘Special effects!’ I hear you yell. As Mark, a man who’s been in the movie business for over 30 years, says himself: that kind of special effect just wasn’t possible in the early seventies when he saw the film. Was this real snuff? He says so. But we only have his word on it, no verifiable evidence.

Mark L Rosen - he says he actually saw a snuff movie which was up for sale...

So what is the definitive answer? Well, the documentary doesn’t give one. It merely presents the facts and lets you make up your own mind, which is good. As I said previously, it’s only flaw – in my opinion – was including the Iraq war clips as they contribute nothing, it was mentioned in the previous section of the film that filming death doesn’t count, so why include the war clips? I’ve no idea. All in all, it’s a good documentary, but it does include some gruesome footage (sometimes unnecessarily) from Cannibal Holocaust (the actual animal killings) and Faces of Death, so if your squeamish, but curious, look away!

Having survived the UK's 'video nasty' (prohibition) era I'm eager to catch up with all previously unseen sleaze and filth. I revel in mixtape oddness, boobage, gore, and proper latex special effects, don't get me started on CGI... - email Ronnie
View all posts by Ronnie →
This entry was posted in Documentary, Gore and tagged cannibal holocaust, death, Documentary, faces of death, henry, killing, murder, snuff. Bookmark the permalink.

Bad Behavior has blocked 618 access attempts in the last 7 days.