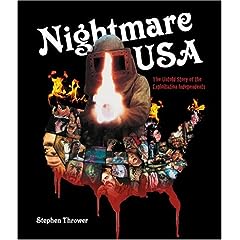 A big beast of a book!

Nightmare USA is divided in to sections. Section I is an explanation of the genre from the 1970’s to the mid-80’s which is literally a who’s-who of sleaze/gore/splatter but without the (now) big names (such as The Texas Chainsaw Massacre etc.). Section II is a group of essays on various films and the people involved, such as The Films of Frederick Friedel, Douglas McKeown on The Deadly Spawn, Joseph Ellison on Don’t Go In The House, and so on. Section III is over 100 movie reviews (from 1970 – 1985), and Section IV is appendices and the index. Weighing in at over 500 pages, it’s informative to say the least!

The majority of the book is in black and white but there are colour sections which, like the B&W sections, display rare video covers, one sheets and on-set photo’s which complement Throwers writings.

The Untold Story of the Exploitation Independents is it’s sub-title. ‘Exploitation Independents’ is a term coined, in the book, by the author (Stephen Thrower) to more precisely define exploitation movies as not exploiting people, but exploiting genres of the time. Not only does it define the term well, it defines the genre as a whole in a highly informative way. At the end of the book Thrower teases that there will be a volume two. It can’t come fast enough!

If you don’t want to pay the £40 (£25 on Amazon.co.uk with free postage) then you could always wait until 2nd Oct which is when the paperback is released at £20.

A cracking book. Buy it! Buy it NOW!

Bad Behavior has blocked 659 access attempts in the last 7 days.